Our physiotherapist, Tom Hassell, will get you running ‘faster & better’ and it is covered through your private health insurance physiotherapy extras! Tom offers a unique program focused on assessing running technique and optimising running speed and acceleration. This is a valuable service for anyone who is involved in running, from a recreational jogger to a top level athlete in any sport.

These specialised sessions are guaranteed to make you a better runner. Improving speed and acceleration results in enhanced performance in many sports, particularly in sports where acceleration over the first 10 meters and top-end speed are required.

Tom has had particular success with adolescent athletes. At a younger age, running technique is more adaptable and can be modified and improved, resulting in maximal impact on sporting pursuits.

As a physiotherapist, Tom represented Australia at the 2000 Sydney Olympics. Tom was also an accomplished track & field runner himself. He has been the number 1 ranked runner in South Australia and he has also been in the fastest handful of athletes in Australia. In addition, he has won numerous races at the prestigious Stawell Gift.

Tom has a specialised and unique skill-set whereby he combines his extensive physiotherapy knowledge with his high-level running experience.

Tom has worked with both recreational and elite athletes of all ages and has had outstanding results in optimising running technique, speed and acceleration. He has assisted many top level athletes, including AFL & SANFL footballers, international soccer players, Olympic athletes and many more. 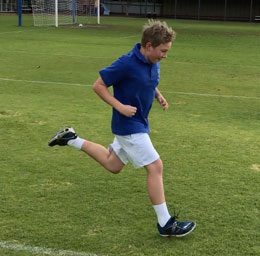 Are you over striding? Do you realise the effect of the braking forces on running speed when your foot lands in front of your body and not under it? 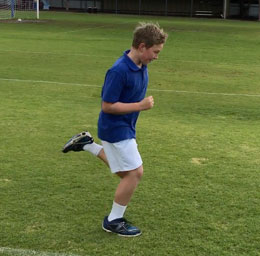 Are your hips too low or is your knee collapsing in the stance phase? Are you minimising your contact time with the ground?

The sled is great for improving strength and power.

The elastic bungee cord is effective in improving leg speed.

The sessions are great fun – bring a friend with you!

How many swimming training sessions have you been to? It’s time to put the same focus on running training & technique.